Stand On Zanzibar by John Brunner (1969) 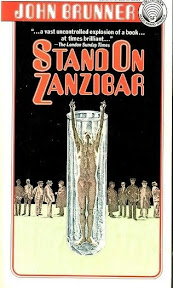 How John Brunner went from writing short complex flawed novels in 1967 to producing the huge Stand On Zanzibar in 1969 is beyond me. At the heart of Stand On Zanzibar are two of Brunner’s stock characters with their quiet introspective British reserve, but wrapped around it is an incredible feat of world building that not only reflects the waves of chaotic change that were sweeping the world in 1969, but which set the pace for almost all the near future fiction for the next 40 years.

The main story line of this novel is stock Brunner. There are two countries, one an impoverished African nation, and another, a Pacific Rim country that is positioning to be the technological leader in the 21st century. Two men, one a quiet academic and the other a middle manager in a huge corporation, who share an apartment in an overcrowded world find their destinies in these two countries.

The African nation is poised to be taken over by an international corporation, but the people are happy in a world where no one else is happy. The Pacific Rim country is the home of a geneticist who has the ability to change the way the human race evolves.

There is a third character that almost makes it to the fore as a major protagonist: the enigmatic author of the Hipchrime Dictionary. He is quoted frequently for most of the book until Brunner brings him in as a character.

What makes Stand On Zanzibar a great book is not the main thread of the novel. The simple plotline of following how the two men cope with the problems of saving the world and confronting the issues presented by each of the two nations would not be long enough to fill one of Brunner’s short novels of the sort he was writing just a few months before. In fact I was very disappointed in the story.

What makes the novel great is the huge amount of extra data that has been tied to the book with chewing gum and bailing wire. There are dozens of short chapters that capture a moment in the lives of the people living in the overcrowded future. There are countless details that enrich the experience of the book (including the New York Fuller Dome that later appeared in Gibson’s Neuromancer.)

Brunner uses news feeds (like twitter tweets, none longer than a hundred or so characters), and he uses vignettes and a couple of times he uses tables of data which, much like Ballard’s "The Index", tell a story as you read them.

Stand On Zanzibar, as well as his later Novel Shockwave Rider, are two of the most influential and prescient books in Science Fiction. Stand On Zanzibar predated the Cyberpunks by nearly 15 years and yet is the standard source book for not only Cyberpunk, but much of modern SF. In 1969, men landed on the moon and Science Fiction stories about the exploration of space seemed to die off. Books like Toffler’s Future Shock taught writers to look to the present and near future. The social changes of the 1960s taught writers to think in terms of the great changes that are coming.

If you read only a dozen Science Fiction books in your life, you have to read Stand On Zanzibar. It is not a good or easy read. It is a complicated and difficult book. I had started it before and given up on it. Parts of it are just bad, but in the end it is a major work by a major genius. It is a book of huge ideas and themes treated with disturbing clarity, detail and believability. Stand On Zanzibar has influenced almost every living science fiction writer in a positive way.

One response to “Stand On Zanzibar by John Brunner (1969)”