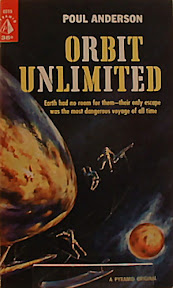 I like Poul Anderson’s books. Orbit Unlimited is several short stories, published separately, that have been tightened up into a short novel. It is the story of people in a future decadent culture that manage to ship out to a nearby star to start a colony and find philosophical freedom.

The word Constitution, as the book points out, is a loaded word. In semantics, a word can have so many diverse meanings as to be meaningless. To call someone a constitutionalist would not convey much meaning. In Orbit Unlimited, the term is vague, but mostly applies to people who wish to retain constitutional freedoms. In the near future, these freedoms are being eroded by a ruling class that wishes to retain any and all rights to do what needs to be done to ensure that they remain the ruling class.

Orbit Unlimited starts out with a request by a commissioner to fund expansion of the space fleet to explore the nearby stars. The request is turned down. It is pointed out that there is no way to fund a fleet capable of shipping off a significant part of the population to colonize another star system. Exploration of space shows no sign of showing any advantage for Earth.

The story proceeds to follow the son of one of the commissioners and a constitutionalist as he takes an 87 year voyage to a near star with other constitutionalists. They have been maneuvered into this to get them off of Earth where the might stir up trouble. The next section describes the colonists on a challenging planet. The protagonist is convinced to help find a lost child who has wandered off and is most likely dead.

Each section is mostly standalone, although interconnected. It feels like Anderson has rewritten them to tighten up the plots to be more novel-like. At 80k words it is short and parts feel very much like a short story.

I am amazed at Anderson’s analysis of the politics and sociology of the future society. At one point they government makes education free, but promotes courses in athletics, music appreciation, basket weaving and other non-scientific subjects in order to keep the population stupid, ignorant, and easy to manipulate. Poul Anderson was issuing a warning that was ignored then and we are seeing the practical results of loss of educational rigor.

This is the last Poul Anderson book on my to-read shelf. I wish there were more.