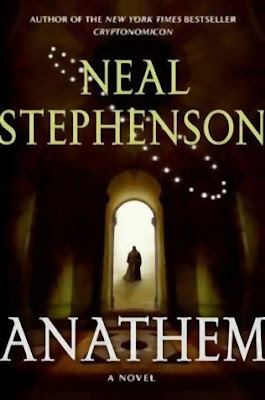 Last year, my friend John and I exchanged long emails comparing history to a conflict between the Aristotelian viewpoint and the Platonist viewpoint. Thinking in terms of these two approaches to reality helps contrast the world of the Scientific with the world of Faith.

I am no philosophy student, but I have read a little. I took a few philosophy survey courses in. I read Thomas Aquinas and St. Augustine one summer. In college I read some of the German Idealists and I enjoyed Teilhard. I read Kierkegaard, and the existentialists in high school.

I did not study philosophy in any organized way and there are huge holes in my philosophical readings. (I’ve never tried to read Schopenhauer.)

Reading Neal Stephenson’s Anathem required every bit of philosophic knowledge that I could scrape out of my skull and I still think that I missed a lot.

Anathem is a Science Fiction novel that is framed on the Aristotle vs. Plato approaches to reality with a little bit of the Copenhagen School of Quantum Mechanics thrown in to create a world, not far removed from our own. In this world there are philosophic convents that are quasi-religious in their approach to philosophy and science.

The protagonist is a 19 year old who lives in one of the philosophic communities and spends his time "in dialog" or else goofing around with his friends. Stephenson lingers on interesting discussions about the nature of reality and what is the basis of human communication. I think many of the reviewers did not enjoy these the way I did. Some reviewers used words like ponderous, which means to me that they did not have the background to appreciate the long dialogs.

The protagonist is suddenly thrown into the center of world events when a visitor from another quantum universe arrives. He alone seems to have to key to stopping the inevitable war with these intruders from outside our universe.

In spite of the heavy philosophy and quantum theory, there is a good old fashioned Science Fiction plot here with action, adventures and a band of fighting Ninjas. It is very good stuff, but not for the faint of heart. I loved it, but your mileage may vary.

Note: I mostly listened to this on my iPod. For the first quarter of the book I used a different cheapo MP3 player that did not let me back up and replay sections that I missed or wanted to hear again. This forced me through in spite of having missed a few short sections. Skipping small sections did not really interfere with my appreciation of the book, but it makes me want to read Anathem again someday when I can take my time and really savor each word.