My Father’s Mother’s maiden name was Galbraith. They family lived in South Nyack for many years. I took this picture at my Mother’s House. It did not photograph well. 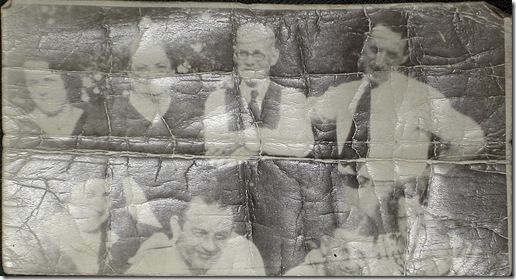 In 1935 Clifford Galbraith who was “shell shocked” in World War I died in a veteran’s hospital. This picture was taken at the funeral.

I remember Aunt Marion, Uncle Bub, Uncle Bill, and Aunt Vera. Vera won beauty contests in her youth and was one of the sweetest people I ever knew. Joe had a Garage on Midland Avenue in Nyack, and in South Nyack before the bridge. Uncle Bill owned the Nyack Taxi for 50 years.

Uncle Freddie was the Nyack town drunk for many years. Everyone knew him and loved him, but he died around the time I was born.

My great Grandmother, Mary Alice, was a Polhemus, one of the oldest and most respected families in Nyack and about as close to Rockland County Royalty as you can get. She married the shanty Irish Joseph Alexander Galbraith who was a professional baseball player and saloon owner, much to the shock and horror of the rest of her family.

My Grandfather, Peter Lawrence Graham, was married to Jennie, who died at the age of 42. I figure my grandfather took the picture. I do not have any picture’s of him.