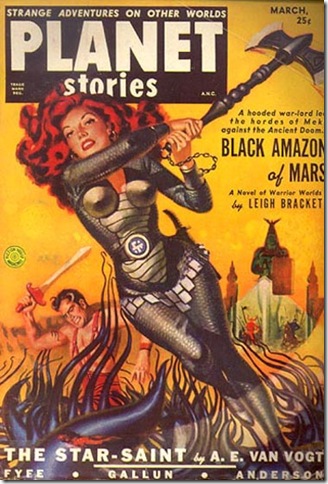 I have been accused of not including women writers in my lists of favorites, but I always include Andre Norton and lately, Leigh Bracket.

Leigh Brackett, known as The Queen Of Outer Space, has written some great SF over the years. Her collaboration with Ray Bradbury, Lorelei of the Red Mist, is one of my favorite SF stories of the Golden Era.

Leigh Brackett might be better known as a principle screen writer on the classic movie The Big Sleep. She filled the pulps in the 40s and 50s with space opera and produced some very good stuff. She was definitely not a hack and produced well written stories with depth in spite of the lurid covers on the magazines.

I picked up an old Ballantine Books paperback edition of The Long Tomorrow to read on the bus. (The cover was not that interesting so I put up a cover for another story from a 1955 Planet Stories.) The writing is easy and clear. The characters are well rounded and compelling. The plot – well it is a 1950s post-apocalypse story. The "life after the bomb" stories were popular, yet done to death in the 1950s. We all worried about Russia dropping the bomb in the 1950s. I remember the weekly air raid drills where we all sat in the hall and put our heads between our knees – like we would have survived a nuclear attack. My uncle had a bomb shelter in his house stocked with dry food and a chemical toilet.

About half way through, I realized that I had read this before. I started to recognize plot points, but I did not remember how it comes out. I am enjoying this read. It has been long enough that this is really a first read. The plot is about a post-apocalyptic agrarian society. It is against the law to have towns with more than 200 buildings and 1,000 people. Technology has returned to a primitive state where an occasional steam engine is as complicated as it gets. Two boys find a radio that had been hidden by a traveling trader. They become obsessed with finding a mythical Bartorstown where freedom of thought and knowledge still exists and its secret denizens prepare for the day when technology will return.

There are adventures as the boys set out on their quest. I have read 190 pages of the 258 page paperback. I will finish it on the way home tonight. (I am averaging 2.5 books a week since I started taking the bus.) It is a good page-turner of a story and I would recommend it, in spite of its overused theme. Brackett is a good writer and this is one of her best books.