Keith Laumer – A Plague of Demons 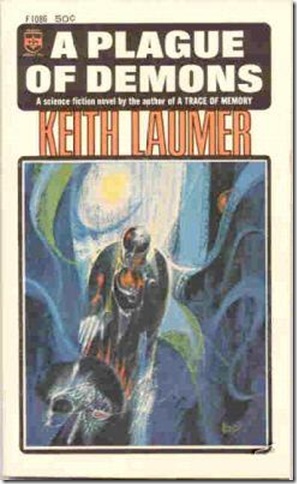 Keith Laumer wrote intense often humorous Science Fiction in the 1960s and 70s. He was prolific and I remember him mostly as a good Short Story writer as he appeared frequently in the SF magazines of the 1960s. I can remember reading several of his Retief Stories in Astounding and Analog.

A Plague of Demons was published in 1964 in IF Magazine and then as Berkley Medallion Paperback in 1965. I remember that the Berkley Medallion books cost 50 cents, which was more than the 35 cent Ace books, but they were higher quality and more adult in content so I preferred them.

The book appeared when Ian Fleming’s James Bond books were popular, and A Plague of Demons is a SF version of a spy thriller. Set in a futuristic world, an agent discovers that men are disappearing from the battlefields of earth and have been doing so since at least World War I. In some of the battles as many as 20% of the armies are missing in action. The agent stumbles upon an alien plot to steal human brains and use them as computers in mechanized battle wagons on distant planets. He enters into an underworld of espionage where no one will believe him except a retarded young man who can see the aliens.

The agent is eventually caught and his brain placed in a war machine, but he "wakes up" and finds that he must battle the aliens as a secret agent in their own army.

This was fast paced and action packed. Some of it is a little over the top and the main character is stock Science Fiction hero (Male, White, 30 and extremely intelligent – nothing wrong with that – I was 30 once). The book is nicely partitioned into two parts marked by a cliff hanger where the magazine would have serialized it. It is a good read and I finished in one and a half days thanks to a problem on the TZ bridge this morning.

There are a few nice sciencefictional ideas, but nothing that original. 1) Using brains of humans, cats and dogs to control machinery. 2) a secret society started by Benjamin Franklin that has been responsible for the survival of the United States. 3) Aliens among us that only children, dogs, cats, and people with a certain kind of brain damage can see. 4) Relentless alien hive minds that sweep across the galaxies conquering everything in their way.

In spite of being a great book to spend a few hours with, it had no real redeeming value and all the action and excitement is little more than empty calories. Some images were very familiar and I may have read it before, but the plot, although interesting, is very forgettable. The characters do not stick with you and the conflict is almost purely physical.  The cover, on the other hand, is very good. It was from a period when publishers put real art on the cover of Science Fiction books. Today they just put cartoons on covers, it seems.